The Center of the Universe: A Memoir 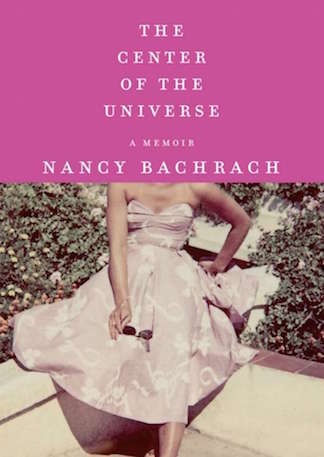 The story is so improbable, it can only be true: A brilliant woman with a long history of mental illness — who once proclaimed herself to be "the center of the universe" — is miraculously cured by accidental carbon monoxide poisoning aboard the family boat. Nancy Bachrach warns readers, "Don't try this at home" in her darkly humorous memoir about "the second coming" of her mother — the indomitable Lola, whose buried family secrets had been driving her crazy.

Aching and tender, unflinching and wry, THE CENTER OF THE UNIVERSE is a multigenerational mother-daughter story—a splendid, funny, lyrical memoir about family, truth, and the resilience of love. 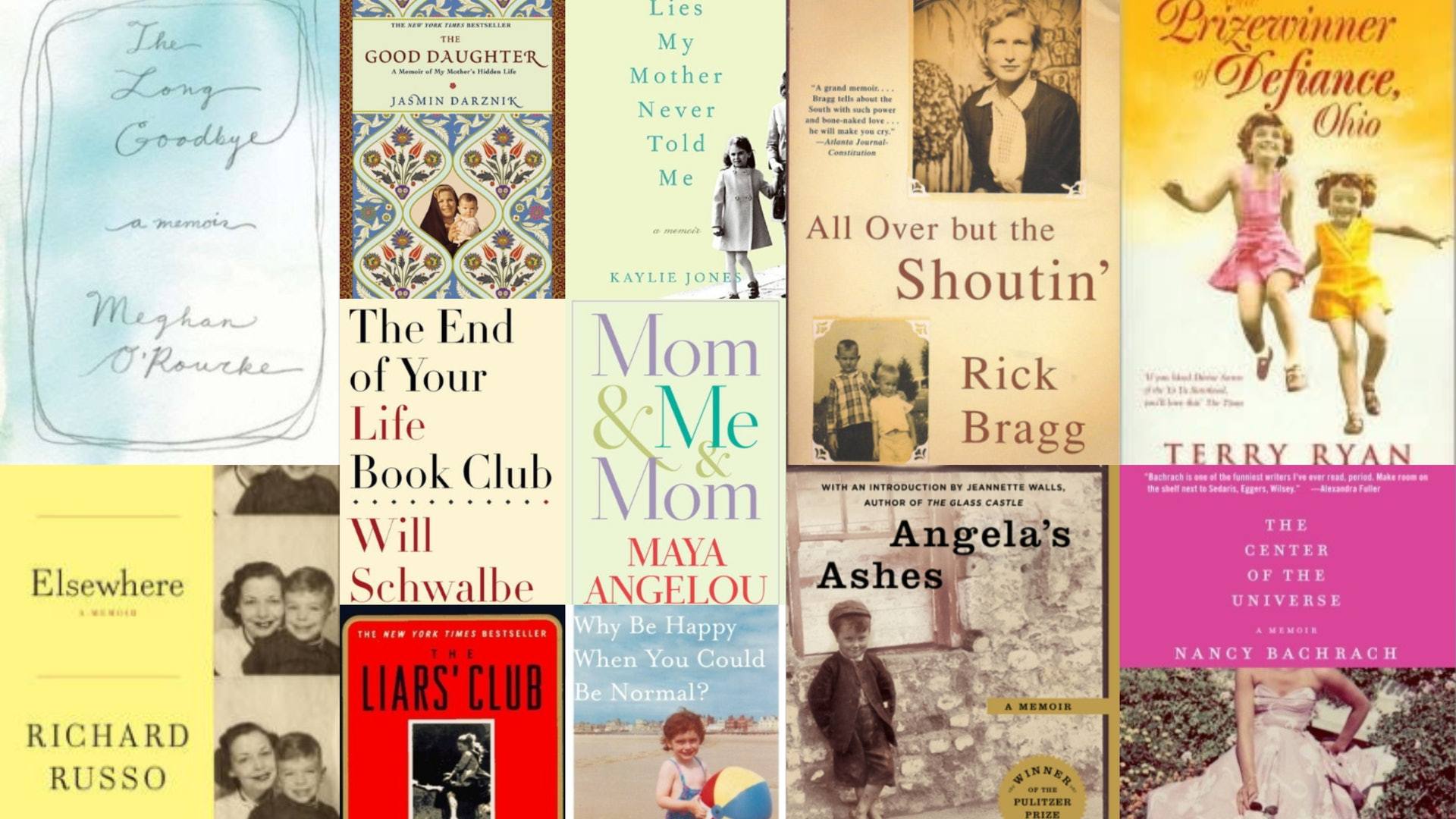 "Dazzling. A darkly comedic style that recalls David Sedaris or Joan Rivers. It's Bachrach's ear and eye for language that makes her voice distinct and haunting."
—San Francisco Chronicle

“One of the funniest writers I’ve ever read, period. Make room on the shelf next to Sedaris, Eggers, Wilsey.”
—Alexandra Fuller, author of Cocktail Hour Under the Tree of Forgetfulness

"Bachrach's moving memoir is just out from Knopf. That it's harrowing isn't surprising — but that it's shockingly funny is. When I went to hear Bachrach read to a large crowd in New York, she was constantly interrupted — as she wished to be — by the audience's laughter."
—MORE Magazine

"Hugely entertaining but deeply empathetic. Middle-class, secular, Jewish sensibility and sensitivity at its best. It's like watching Philip Roth letting his hair down. Profoundly moving."

"The tale of Lola's instability alone would earn this book a prize spot among the ever-growing genre of crazy-mother memoirs. But this one also has a can-you-believe-it twist straight out of daytime TV...."
—The Washington Post

“Marvelous. . . . A 5-star memoir of a difficult subject.”
—Armchair Interviews

“A sophisticated, funny debut. . . . With smart, subtle prose, Bachrach limns a journey toward love that feels fresh, organic and as unpredictable as life itself.”
—Kirkus Reviews

“[The Center of the Universe] has a freshness and loopy humor . . . infused with humanizing pathos, and readers may well tear through this compelling read in a single sitting.”
—Booklist

"Piquant and ribald...Bachrach's prose is wry, risky, and feels like she has found her moment at last."
—Publisher's Weekly

"Bachrach finds her literary voice. Spirit is written into every chapter."
—Providence Journal

"Hard to put down: This zany family memoir is the ultimate mother-daughter story."
—Rhode Island Reads

“A delightful memoir of a family’s response to a bittersweet tragedy... Readers will...end up loving 'Lola,' and wishing they had a lunch buddy who can tell a funny story like Nancy.”
—Curled Up With A Good Book

“Of the many ways to deal with a father’s sudden death and a mother’s injury and madness, Nancy Bachrach chooses breezy comedy. Like the best of the stand-ups, she pushes the wisecrack and irony to the outer limits in this smart, fast-paced family memoir of disaster.”
—Alix Kates Shulman, author of To Love What Is: A Marriage Transformed

"A sparkling memoir...Vivid and vibrant...Filled with wit and humor....An eminently successful portrayal of a family, effectively combining cleverness with banter and grief with farce to demonstrate the close linkage between comedy and tragedy.”
—The Jewish Chronicle

"If there's a black-comic angle, Bachrach will find it....Bachrach's book – unsentimental and all the more moving for it – is ultimately about a universal condition: the renegotiation of the adult child's relationship with her parent."
—The Austin Chronicle

“Every once in a while you come across a memoir that resonates so true to your life that you think, ‘If I were only as witty and charming, I could have written that!’ Even if you are lucky enough not to over-identify with Bachrach’s completely crazy mother, you’re bound to be moved by this terrific book.”
—Ayelet Waldman, author of Love and Other Impossible Pursuits

“[Bachrach’s] acidly funny exasperation, her palpable pain, her volatile mixture of love and loathing for what her parents put her and her siblings through feels genuine. And it makes for riveting reading....Part of the story is rollicking stuff, but dark currents underlie the hilarity....By the time the book ends, love has conquered chaos, tenderness flows like a healing balm and Lola's insistence that she is the center of the universe doesn't seem so crazy after all.”
—Hartford Courant

“Nancy Bachrach is a sharp observer of all around her and has a piercing ironic humor that serves as a dearly needed life preserver. The Center of the Universe is one of those stories that grabs you by the throat and leaves you proud of our capacity to survive and laugh and enjoy.”
—Anne Roiphe, author of Epilogue: A Memoir

"The Center of the Universe is a beautifully written symphony of lunacy and hilarity. Nancy Bachrach has the comic touch."
—Robert Klein, author of The Amorous Busboy of Decatur Avenue 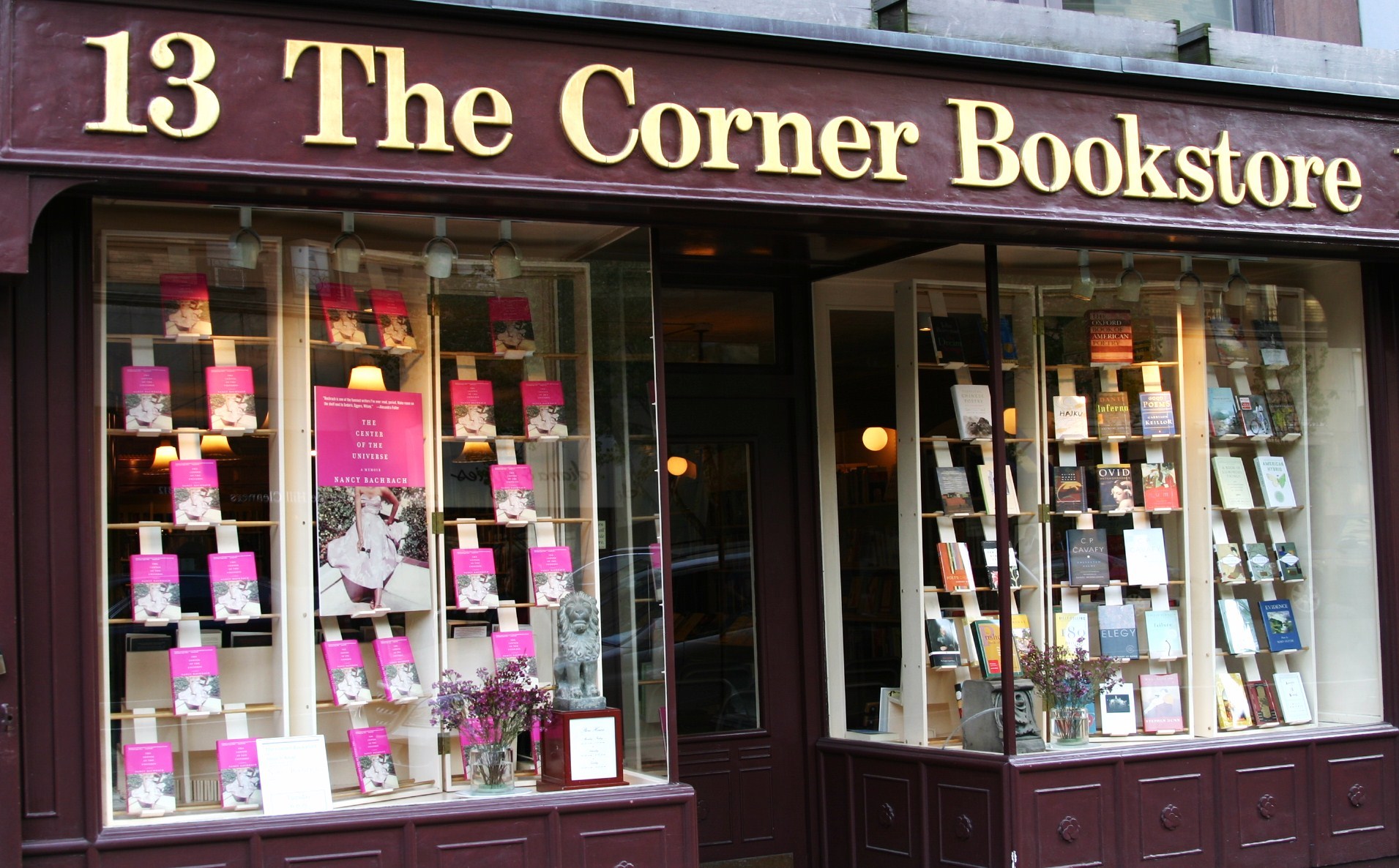 The Corner Bookstore in Manhattan on publication day. 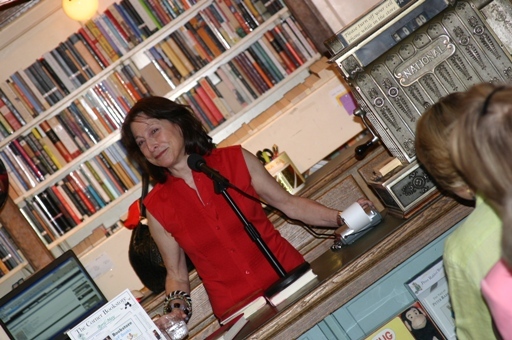 Nancy Bachrach worked in advertising in New York and Paris, "spinning hot air like cotton candy." Before that, she was a teaching assistant in the philosophy department at Brandeis University, where she was "one chapter ahead of her class."

She lives in New York City. This is her first book.

In the ancient forest on the Right Bank of Paris lies a jewel-like island where Napoleon, just back from the Alps, built a Swiss chalet. Emerald lawns and ruby flowers shimmer beside a sapphire lake as peacocks stride by. On a sunny Sunday morning in May, I am ensconced on the chalet's terrace, now a cafe, replenishing more energy than my leisurely jog has exhausted. Around me, lazy hands stir sugar cubes in slow circles and spread butter on crusty baguettes. These are the only signs of industry in a city where the principal exercises are digestion and strolling, where laissez-faire is practiced and preached, where intermission is the pace of life.

I saunter through the woods toward my apartment as the ladies of the night flee daylight like vampires stumbling upon a cross. I know one of the Brazilians by name, since I pass her most mornings as she's wrapping up her night's work in tissues. Alexandro has just become Alexandra. Like her, I came to Paris to reinvent myself three years ago. Although I had no surgery, I did change my name, and while no one calls me a prostitute, sometimes I feel like one, admittedly, in another old and unlofty profession, advertising.

I've been relocated from headquarters in New York to tackle a marketing emergency for an important toiletries client— the launch of France's first sorely needed antiperspirant. Our team on the Seine—ninety-nine people smoking and loitering above a gas station—won the coveted assignment (code-named Stink-o) even though they've failed for a decade to browbeat their countrymen into American bar soap. Which is why someone very high up at bar soap headquarters, someone with a good nose but a rarely used passport, smells an untapped market for deodorants over here, and although I can imagine the logic that led to this conclusion (and my relocation), the person who reached it hasn't had to sit through forty focus groups in unventilated conference rooms in the provinces. Getting the natives to "adopt" a roll-on, stick, or spray will require "a paradigm shift," I'm learning, a long and winding road that's synonymous with a huge media budget and then, usually, failure. What would make the French—who relish the bleu on their cheese and their skin, who have a whole class of things they fondly call "stinky"—what would make them plug up their pores with wax to placate and enrich our big American client? This is the onerous marketing dilemma I face daily in my otherwise idyllic life in the City of Light.

To help me think through the Stink-o conundrum, I have the Semis—a squadron of French semiologists, not just translators but also linguists and cogitators, who are deconstructing the semantics of our antiperspirancy muddle. Not solving it exactly, just scrutinizing it in the Gallic way, ad nauseam. For my edification, the Semis are writing a treatise on perspiration, its cultural heritage, its evolutionary value, its distillation of primeval body essences. My task is to develop a successful campaign against sweat, when it rivals the madeleine in the collective olfactory unconscious.

Tucked behind a manicured garden in the Sixteenth Arrondissement is the elegant rue where I live—in a Beaux-Arts town house with a tiny filigreed elevator, where I would imagine Maurice Chevalier crooning to Leslie Caron even if "Gigi" weren't playing on the concierge's stereo. From my apartment on the top floor—four rooms with high ceilings and crown moldings, eight times the size of my New York studio, thanks to the value of the dollar under Reagan—there's a postcard view of the tip of the Eiffel Tower, which I am admiring through open windows, when my phone rings.

The connection has a bad echo, so it's an overseas call, although it's two in the morning in the States.

Surely, as the poet said, some revelation is at hand.